It's official. I have signed up for my first full marathon, the Route 66 Marathon in Tulsa, OK +Route 66 Marathon on November 24 (a few days shy of my 56th birthday). I had originally planned on making the Philadelphia Marathon on November 17 my first my first, but I decided to change. The main reason I changed was because I got a call from one of my brothers informing me that he going to re-marry his first wife and move to her home in Muskogee, which is about 45 minutes southeast of Tulsa. We haven't seen each other since our mother's memorial over 2 years ago, so this seemed like a good chance to kill two birds with one stone.

I had read about the Route 66 Marathon some time earlier and thought it sounded like a cool race to run. From stuff I've read I guess it's not the most exciting course, but it has the reputation of being exceptionally well organized. They also design pretty cool medals, and they have a special medal if it's your first race. (I am unclear if you get the first race medal in addition to or instead of the regular medal - I guess I'll find out!) Finally it's a large race and I've found that I much prefer large races. So, I registered before the price went up, and I booked a car and a hotel. I'll book the flight in a few weeks. Very excited! be sure to follow me on Twitter and/or friend me on Facebook - especially if you plan to run this race (but go ahead and do it anyway...) 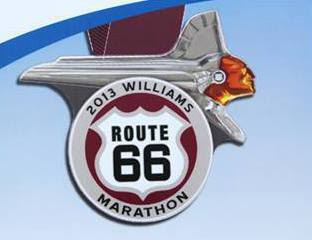