This weekend did another of those unexpected races - the 2013 Katonah 5K Road & Trail Race. I learned about the race a few weeks back when I saw a sign for it on the local streets. As it was on a Saturday - my normal day for a training run - I figured "why not"? The training run I was scheduled for was 6 miles but I figured I could just make up the additional 3 miles.

I signed up on line and I went to pick up my bib at Cross Sport Woman in Katonah on Friday the 6th. I was chatting with some other folks who were picking up their bibs (about parking, actually) and I mentioned that I was planning to get there early to put in an additional 3 miles before the race and Bettina at Cross Sport told me that the route for the 5K would be marked so I should just run the course. I thought that was a good idea. I also picked up my shirt and I was pleasantly surprised to find out that it was a very nice tech shirt - unusual for a 5K. 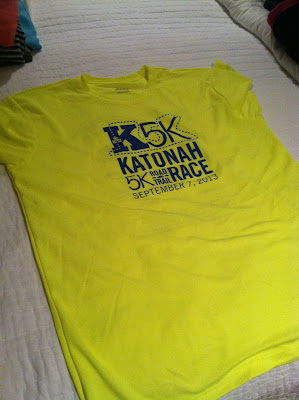 On the day of the race (Saturday the 7th) I got up early to get to the race. I decided to wear a long tech shirt because it was fairly chilly, and I put my WISH team shirt over it. I got to the location of the start of the race (Katonah Elementary School) at about 7:00 - an hour before the start. Some of the vendors and sponsors were just beginning to set up. I wanted to time it so that I would finish my first run right when the race was due to start, so I just hung around for a few minutes trying to stay warm. At about 7:20 I started running the course. As Bettina had promised, the course was marked with white arrows - for the most part. I had saved off the course map on my iPhone so I could refer to it, but I still managed to get lost. Part of the course went onto a trail and I messed up somewhere and I ended up backtracking. Good thing I had Google maps on my iPhone - I was able to get myself straightened out and got back on track.

Still, I just made it back to the start in time for the start of the race - or so I thought. They gathered all the runners at the start and proceeded to go through about 10 minutes of announcements. Organizationally I think that was my only real complaint - please start the race on time! Anyway, at about 8:10 the horn sounded and off we went.

Most of the course was on the street and it was quite hilly. I don't mind hills - I train on hills near my house regularly - but some of these were quite steep! Interestingly I find going down a steep hill harder than going up. I'd say the most interesting feature of the course was the trail portion which wound through one of the town parks. The only complaint I have about the course was that we ran on the grass for a bit which I hate early in the morning because your shoes get wet. And after that we ran on dusty trails so my shoes got quite dirty (not that my "veteran" running shoes look all new and clean). Still, it's a very nice change of pace to be running on a nice, shaded trail.

There were not a lot of folks out there cheering us on but there certainly were a few - and after all, it's only a 5K so there's not all that much opportunity for folks to get out there. There was also one water stop which appeared to have been set up by the folks who lived there.

I was really treating this like a training run. In fact I specifically worked on pacing myself. I use Jeff Galloway's run/walk/run method when I run. In other words, I incorporate regular walking breaks into my runs right from the beginning. This becomes a challenge if you are trying to pace yourself with another runner who is not taking walking breaks. So, what I did was to find a runner I wanted to pace myself with and go ahead of them when I ran and let them pass me when I walked. It worked out pretty well, but they later slowed down so I kept going.

Even though I was not really running full out I was still pretty happy with my time. And it was nice to get out there and do a race again.

My overall experience was very positive. The course was interesting and challenging without being too crazy. And the organization overall was very good. There were not a lot of runners there - about 200 I'd say - but everyone had a good time and I hope that more folks show up to future races. I know I will.

I can't wait for the Rock and Roll Providence Half Marathon in September!