Listen to my podcast where I talk about running in the 10K!

On Sunday December 15th I ran in the NYC Runs Hot Chocolate 10K on Roosevelt Island with my daughter Natalie. This was the second time Nat and I did a 10K together, having previously run the Rock 'n Roll Brooklyn 10K last October. As far as this race goes, all I can say is...

HOLY CRAP IT WAS COLD!

YOU'VE HEARD OF A "TOUGH MUDDER"? THIS WAS A "TOUGH SLUSHER"!

IN SOME PLACES THERE SO MUCH SLUSH, ICY WATER AND MUD THAT RUNNERS HAD TO GO OFF COURSE!

OUR FEET WERE FREEZING AND EVEN GOT NUMB A FEW TIMES!

IT WAS A BLAST! 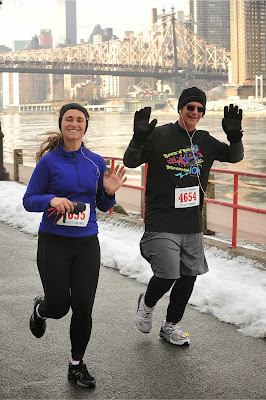 The fact is that, for me, as with most running is a mostly lonely pastime, Admittedly that's one of the things I enjoy about it - getting out there all by myself and getting lost in my reverie as I chug along mile after mile. Still, on the occasions when Nat is around and we can go running together, and especially on the (now) two occasions that we've done races together, it has been a thoroughly enjoyable experience. We don't even talk all that much, Nat listens to music and I listen to podcasts, but just having someone along to share the experience makes all the more memorable.

Nat and I both use the "run/walk/run" method and we do intervals of 40 seconds of running and 20 seconds of walking. We use the same iPhone app to pace ourselves, and what we do is we synchronize our timers so that we are told when to switch between running and walking at the same time. We always say we must look funny because, without a word, we both start running or walking at the exact same time.

OK, so some specifics about this race:

Getting there. I have to say that this was a bit of a pleasant surprise. The race was on Roosevelt Island, a tiny sliver of land off Manhattan in the middle of the East River. Driving to Roosevelt Island is inadvisable and parking there can be a challenge so we decided to drive to Manhattan and take the Tram to the Island, parking near the tram station. Now, the night before the race the weather was nasty and about 4 or 5 inches of snow had fallen. it was questionable whether the race was even on. Be we got an email at 7 on Sunday morning informing us that the race was on. We hit the road about 7:45, with the race start scheduled for 10:00. On the one hand I wanted to leave enough time, but on the other hand I didn't want to get there too early because we didn't want to have to hang around in the cold. That said, i was worried about the roads so i wanted to leave plenty of time. It turned out that the roads weren't too bad and we got there by 9:00 (despite the fact that I inadvertently put an address in Brooklyn into the GPS, which we realized soon enough that it didn't cause a big problem). We found a parking space just a few blocks from the tram (which is like a large cable car) and were there by 9:15.

Pre-race. The race organizers suggested getting your bib a day or two before the race, something we were not able to do. Still, getting our bibs the morning of the race was no problem at all. My only complaint was that the tent where you needed to go to get your bib was in a field which was covered in snow so it was difficult to avoid getting your shoes wet. There was another tent so you could pick up your "swag" - in this case a nice hot chocolate mug (in keeping with the theme of the race). Nat was disappointed that there was no shirt, which is what she wanted. They had shirts to buy but they only took cash and I didn't have any on me. I was able to contact the race organizers and arrange to buy a shirt later. 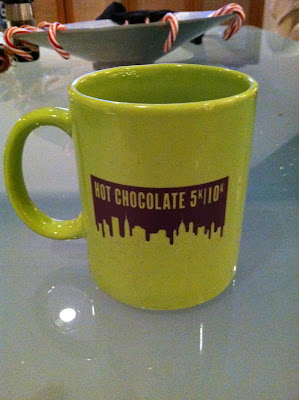 On that subject, a quick word about the race organizers. For various reasons (such as my losing my driver's license during the race) I have had the occasion to have more email communications with the NYC Runs folks than any race I have ever run before. And the folks from NYC Runs have been nothing but helpful. I can't say enough good things about the folks who engage with the participants.

Anyway, as I mentioned it was a cold day so that last few minutes before the race it was tough to keep warm. After checking our bags we actually discovered an apartment building with an open lobby where we could hang out and stay warm for a few minutes. Surprisingly there were only about a half dozen other racers who had discovered this as well. We stayed there for about 10 minutes then headed out to the starting line just before 10:00.

The course. The 10K course was, essentially, 2 loops around the island (like I said, Roosevelt Island is small). We started near the tram station, headed north on the west side of the island, looped back south on the east side, and then completed another loop once we reached the southernmost point on the island. On the northern part of the island there were a couple of points where the course got particularly muddy and slushy. Having gone through it the first time, we weren't too thrilled when we looped around and headed back through the same section! Still, much of the course was very pleasant, with a lot of it being along the river. On a nice day this must be a spectacular place to run with the river along side and the Manhattan skyline on the other side.

The snow and slush slowed us down quite a bit, but still I was pretty pleased with my performance. Nat had to slow down a bit so her old man could keep up. Still, we came across the finish line together, happy for having accomplished another race together.

Post Race. After the race we picked up our bags with no problem. They had stations set up where you could get hot chocolate, but neither Nat nor I are big on hot chocolate so we skipped that and just headed back. The cold weather was not exactly conducive to hanging out. Too bad, because it looked like a pretty location. I am going to keep my eyes open for races on Roosevelt Island when the weather is warmer. And I am seriously thinking that I will to the Central Park Half Marathon that NYC Runs is having in February.
Posted by Unknown at 6:36 PM