I had the pleasure of running the Rock 'n' Roll Brooklyn 10K last weekend - and what made it particularly fun for me was that I was able to run it with my daughter Natalie who was home from college that weekend. Nat had not been feeling well - with an upper respiratory infection - and we weren't sure that she would be able to do the race but in the end she was able to do it.

It was a beautiful day in Brooklyn on Saturday - starting off brisk and getting warmer as the day progressed. The race was being held in Prospect Park which is one of the most beautiful areas in Brooklyn. The race was scheduled for 7:30 AM. Our house is a bit more than an hour from Prospect Park so we left a little after 5:00. The drive to Brooklyn was fast and uneventful. I had gone online and found a parking structure not far from the race start, but when we got there we could see there was plenty of street parking so we just did that. I had intended for us to take the subway about 2 stops but in the end we just decided to walk. In retrospect what I would have done would have been to go the race start and find the closest street parking. I'm sure that if we had arrived later it would have been tougher to find street parking, but when we arrived about 6:30 there was plenty of parking.

As we walked through Brooklyn Nat commented on how she would love to live in Brooklyn after she graduates. I commented that her mother and I would love it if she moved to Brooklyn, to which she replied "Maybe I'll move here after you retire and move someplace else". Nice.

The walk turned out to be longer than I expected - about 25 minutes. Still it was a beautiful day and a nice walk so we enjoyed it. That said, by the time we got to the race start we didn't have much time before we needed to head over to the starting corrals. In fact, we pretty much just had enough time to pick up Nat's bib and drop our stuff off at the bag check. As I had discovered when I ran the Providence Half Marathon, the Rock 'n' Roll folks did a very good job of organizing things. Bib pickup for Nat and the bag check was no problem at all. I had picked up my packet a few days earlier in Manhattan, and the situation there was equally well run. Unfortunately in both cases there was not enough time to check out vendors and such - when I went to pick up my packet in the city it was in the middle of the work day and I needed to get back.

Much like the Providence race there were many corrals with several hundred people in each. I'm not sure how many corrals there were - but I'd say at least 10. And each corral appeared to be much larger than what was at Providence. In fact, I thought there were a lot more runners at this race - in fact I even tweeted about this. I was very surprised later when I looked at the results to see there were only a few hundred more. Also I noticed that they didn't seem to be making as big a "deal" out of each corral start - or maybe they just stopped caring by the time they got back to us in corral 8. All that said, the race start was well organized and went smoothly. 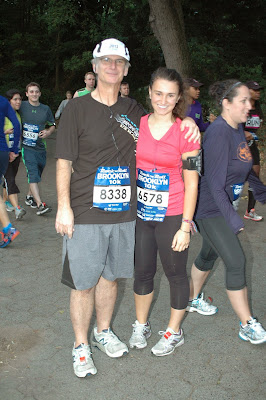 Running through Prospect Park is an absolute joy. Beyond a doubt one of the nicest courses I have ever run on. There is a wonderful mix of urban and park-like settings all within very short distances of each other. You are running along a crowded, busy street lined with brownstone apartment buildings one minute, then down a tree-lined avenue the next minute. Add to this a liberal sprinkling of statues and, of course, the magnificent arch at Grand Army Plaza and you have a truly unique and spectacular course. 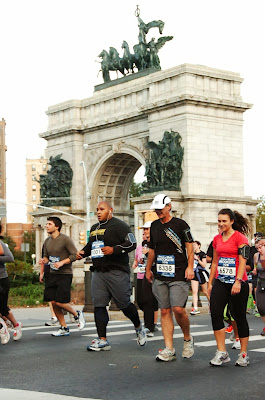 I do have two complaints - one that Rock 'n' Roll has control over and one that they likely don't. First, especially as compared to Providence, there seemed to me to be a dearth of bands along the route. I seem to recall in Providence that you were rarely without the sound of music, while in this race there really seemed to be very few bands. The organizers promised 6 music stops but I can honestly only remember 3 bands. Maybe 4. But I could be mistaken. Also, the crowd support on this race was not meager - it was nearly non-existent. There was pretty much nobody along the course except for a few spots. (One of my favorites was a kid of about 4 yelling out of his apartment window.) At the end of the race there were a bunch of people, but pretty much nobody along the course. Perhaps there were some regulations regarding this? I don't know...

Nat and I talked about the race about a week before running it and decided we would try to finish in less than 1:10. Unfortunately, as I mentioned earlier, Nat was not feeling well so we took it easy. Still, we managed to finish in 1:15. We kept pace with each other throughout the entire race. I had to remind myself to slow my pace down from time to time since I knew that Nat was not 100%. Funny thing, once the ending gate was in sight, Nat suddenly really picked up her pace. She later told me that she wanted to go a lot faster at the end but felt guilty about leaving me behind. I told her i wish I had known that she wanted to go faster - I would have been right there with her! 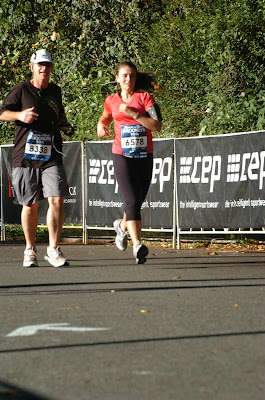 As with the Providence race, the post race area was well organized There were bananas, bagels, chocolate milk, water and Gatorade. There was entertainment in the form of a band playing as well as a (very popular) area where you could get beer (including one free beer for every runner). I just can't bring myself to have a beer at 9:00 in the morning, although there were plenty of other folks who had no issue with this. Picking up from bag check was also easy - although I had a hard time finding it (the bag check had not moved, I just could not remember where it was). One minor issue was for those, like Nat, who had picked up their bib that morning. Shirt pickup was after the race and the shirt pickup area was a bit disorganized with very long lines. This situation could have easily been rectified with signs indicating where the men's and women's shirts could be found. Not a big deal, still a bit annoying. 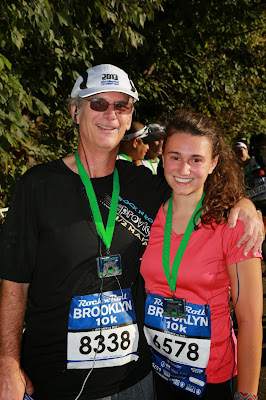 So we come to that subject that we all know is the only thing any of you reading this really care about, right? How's the bling? Is the shirt a good one? The answer is - in keeping with what seems to be the norm for Rock 'n' Roll - very good. The shirt is a very nice tech shirt with very cool graphics. And the finisher's medal is a good, heavy, substantial medal with a really nice design featuring the arch at the Grand Army Plaza. Again Rock 'n' Roll does not disappoint. 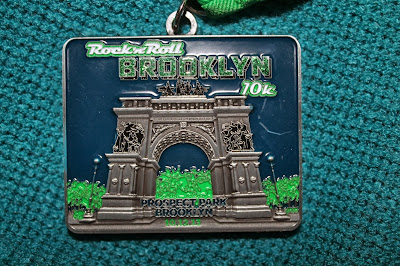 This is an awesome race. In particular, it's nice to run a 10k where you get a shirt and medal that is comparable to what you would get running a longer race. I absolutely LOVED running this race! Nat and I had a fantastic time! My only major suggestion to the organizers would be to add more music to the course. If they do that then this will be a nearly perfect event. Will I do it again? Absolutely! Don't be surprised to see me out there again next year!

Note: Completely unrelated to her not feeling well before the race, Nat's foot started bothering her after the race. It got so bad we took her in for an x-ray. No bone damage thankfully, but soft tissue damage that probably came from a combination of riding her bike at school and running. Bummer. But she'll get better and she told me that she definitely plans to start running again as soon as she's better.
Posted by Unknown at 5:14 PM