On Sunday, April 21 I ran the Unite Half Marathon at Rutgers University in New Jersey. The race is organized by CGI Racing who organize several other events in new Jersey and Pennsylvania.

This was my third race. One interesting aspect of this race - for me - was that this was the first time I was not concerned about my ability to finish the race in time. My first half marathon was the Walt Disney World Half Marathon in January. runDisney - who organize the race - made a big point of needing to finish within 3 1/2 hours. As it was my first race I was really not sure how long it would take me. My second was the Sleepy Hollow Half Marathon in March. This race also had a 3 1/2 hour limit, and while I already had one race under my belt, this race was also on a much more challenging course. In both cases I needn't have worried. I won't go into details here (read the blogs if you'd like more info), but suffice it to say that while I was not exactly posing a threat to the elite leaders, I was also never at risk of not finishing in time. Anyway, the Unite race was on a relatively easy course which would be open for 4 hours so I had no concerns about being able to finish. This, combined with it being a beautiful (albeit a bit chilly) day and the fact that this was a large race with over 3,000 runners led to me really looking forward to it.

My day started at 4 AM. I had  gotten all my stuff together the night before so I was able to get ready and get on the road at about 4:40. The drive to Somerset was a little under 2 hours, and there was no traffic (unsurprisingly) so I arrived at about 6:30. I wanted to have a hearty breakfast before the race so I stopped at a Dunkin' Donuts and had a sausage egg croissant. Big mistake. First, the thing was disgusting. Second, I belong to Weight Watchers and when I added it to my log later that day I discovered it was 19 points! That's about half my daily allotment. I'll never do that again.

I then drove to the venue. Now, this was a very well organized race, but the final trip to the venue brought out my one complaint. There was absolutely no indication where the start was nor where you should park. There were a bunch of signs with "CGI Racing" and an arrow which I took to be signs pointing to the starting area so I followed them. I soon realized they were actually signs marking the course route. I finally got to a parking space that looked reasonable and turned out to be pretty close to the starting area.

It was a beautiful clear day but quite chilly at about 40°. I had pre-arranged to pick up my packet the morning of the race (for an extra $15), so I picked up my packet including my bib and what I have to say is a very nice black, short-sleeve race tech shirt. I decided to put the new shirt under the long sleeved shirt I was wearing for an extra layer.

I took off my sweater and warm-up pants about 10 minutes before the race was set to start, put them in my bag and checked the bag. I then went to the starting corral where it was warmer because of all the people bunched together. A few minutes before the race started they played "Sweet Caroline" in honor of Boston - nice touch. They then played the National Anthem and a few minutes later we were off.

The course. The entire race takes place on Rutgers campus. The course is fairly flat. It contains a large number of switchbacks as you wind your way through the campus. With all these switchbacks I found myself thinking about the Sleepy Hollow Half. There was one spot with a similar switchback. There was a woman a bit ahead of me. Just before hitting the section where we went out to a point and came back, her boyfriend or husband (I assumed) was waiting for her to catch up. Instead of running to the end and coming back she cut across and continued on with her partner. Now, I really didn't care, but I found myself thinking about it on this run and how, if I had done that, I just would have thought that I cheated myself. Another interesting thing: In addition to the Half marathon there was also a 8K. As we were waiting in the corral the announcer repeated several times that the 8K racers should wait, that they would line up at the start in the opposite direction after the Half Marathon had started. Anyway, about 6 1/2 miles in I noticed that we passed back under the starting gate going in the opposite direction. It dawned on me that the rest of the course would follow the 8K course. These was born out by the fact that we would see mile markers for the 8K throughout. (at about 8 1/2 miles we passed the 8K 2-mile mark and I exclaimed "What?! Only 2 miles?!)

While the course was pleasant enough I do have one complaint. What with running on a college campus I had the image in my head of running past old ivy covered buildings and open grass covered quads - the sort of thing I see when I visit my daughter in college. Well, unfortunately the Rutger campus - at least the part we saw - was not nearly so nice. It was, well, a little boring. Most of the buildings we saw were either athletic buildings of what looked like administration buildings. Like I said, pleasant enough, but not what I was hoping for.

On the plus side there was quite a bit of entertainment on the course, most of which came in the form of musical acts. There was a marching band and several rock and roll performers. One thing I noticed was that the bands were often placed in areas where you would pass them twice from different points during the race. As an example there was a marching band at the start of the race that we passed again when we came back to the start half way through.

Organization. CGI Racing did an excellent job of organizing the race. My only complaint - as I stated earlier - was that they were not very clear about the parking. (When I left I realized I wasn't sure where I parked. The shuttle dropped us off a ways from the starting spot, and all of the tents and stuff had been taken down. Luckily I found my car fairly quickly.) In fact I would say this surprised me even more than it might have otherwise precisely because they were so well organized - I was expecting clear indications of where the parking was. Everything else was terrific. They communicated well using Facebook and email, their website is well organized and informative, and the event itself was pulled off efficiently and professionally. It was also obviously run by people who understand the needs of runners (truth be told I have only done 3 races and in each case it was obviously they were understanding of the runner's needs). One good example - the finish was a good distance from the start, so for bag check they used trucks that moved from the start to the finish so you could get your bag back right after finishing the race. Also, after the race they provided food - pasta salad, a yogurt/berry parfait and cookies. I had planned to stop for lunch on the way home but I didn't need to.

Tchotchkes. Besides the shirt we also got a goody bag with a few freebies and, of course, a finisher's medal. On the CGI website they had pictures of the medals from last year (the United race logo) and I was expecting something similar. As we approached the finish I saw some folks who had already finished with the race and their medals - round and shiny - were clearly different. Then, when I reached the finish, I was surprised when I was given a different, square medal. I figured out that the medal I saw earlier must have been for the 8k.

Would I do it again? Possibly. On the one hand the course was not very exciting, but it was a very well organized race. I will certainly keep my eye on other races organized by CGI. 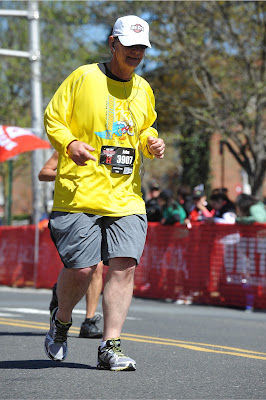 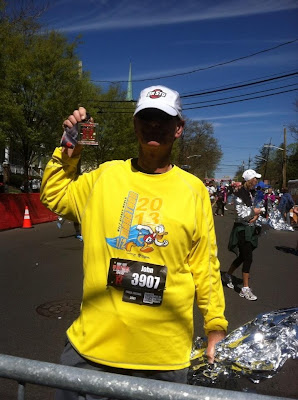