A Blog by any other name

For the 3 or 4 people out there who have read my blog so far, you will note that I decided to change the name of the blog. The reason is that I don't want this to really be just about running. I want it to be about my journey toward being more fit. I thought of calling it "Getting Fit in my Fifties", but honestly (and I may be giving myself too much credit here) I like to think I was already pretty fit. At least for a guy in his fifties. What this is really about for me is getting more fit. Getting fitter. So, I landed on "Fitter in My Fifties Blog". That name will last five years at any rate.

That said, I don't intend to change the focus of this blog. The main method I am using and intend to continue using in my quest toward a fitter me is running. Both using running as a way of getting fitter as well as (more importantly for me, I think) using running races as a motivator.

OK, so the thing I have been dealing with this week is a soreness in my back that seems to have started when I started a yoga class. It started out as a general soreness but has evolved into a soreness in a specific area of my lower right back. It bothers me more when I'm doing things like walking up stairs. Now, I don't mind the pain, but just with less than 4 weeks to my next half marathon (the Sleepy Hollow Half Marathon), the last thing I want to do is injure myself. And on top of that I have a long (12-13 mile) run planned for this weekend. My intention had been to run the hilly course near my house, but I was growing afraid that the hills would make my back worse. Also, as I mentioned, the pain in my back had changed and become more focused on one spot - leading me to think it had gone from "general soreness" to a specific, albeit very mild, injury.

My week was pretty typical. I did Yoga on Sunday followed by weights, a short 30-minute trot on my treadmill followed by stretching on Monday, and core work and weights on Tuesday and Thursday. On Wednesday I went to another yoga class at my gym (which is at my office), followed by 45 minutes on the treadmill. That was a workout! Friday I hadn't planned to do anything but I changed my mind and did a 30 minute walk on my treadmill.

On the weight front I was unchanged.

I also saw my chiropractor this week (who is also a runner) and he basically told me that I've been doing plenty of running on hills, so I should give my back a rest and do my run on a flat surface. So, I decided to go to a very long walking/running/biking trail about 20 minutes from my house. I set out on Saturday and drove to the trail. As I mentioned earlier, my back pain had become more focused. As I started the run I could really feel it. About 2 miles in I was really wondering if I was going to be able to continue. But as I kept going the pain went away and by about mile 3 I couldn't feel it at all, so I pressed on.

I decided I wanted to do 13 miles - actually, 13.1, the distance of a half marathon. And I also set a goal of a 14 minute mile average. This would get me at 13.1 at about 3:03:30 (OK, 3:03:24 to be exact). As a point of reference I did the Walt Disney World Half Marathon in 3:27 - but that was a very crowded course with a lot of distractions. One bit of advice I've gotten that makes sense is to try to never be too far away from your car. So, I ran in one direction on the trail from the car for about 3 1/2 miles, turned around and ran back to the car and went in the other direction about 3 miles and back.

So here are the overall stats from the run, as shown on my iRunner ap: 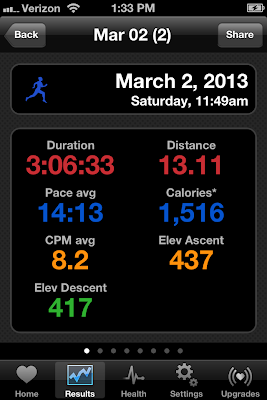 As you can see I didn't quite meet my goal but I was close. Here are my splits:

The longer time at mile 7 was due to my stopping at my car for a few minutes. As you can see the first 2 miles were a bit slower due to my back  pain. But then I was able to kick it in. Interesting, when I looked at the elevations I also discovered that those first 3 1/2 miles were much more uphill than I thought: 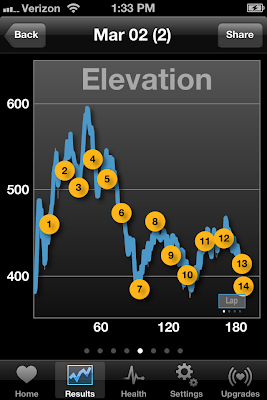 A final note - sort of a product critique. When I was running shorter distances I bought a water bottle for runs. Instead of having a cap that you needed to open and close it has a sort of nipple that is supposed to be spill proof unless you suck on if. Well, it never worked very well and always spilled water. On this run a swear it spilled more than I drank. I also have a water belt with two bottles, but I lost one of the bottles and I haven't had a chance to get a replacement yet. I ordered replacement bottles so I decided to throw the other one away. It's useless. if you ever see one of these don't get it. 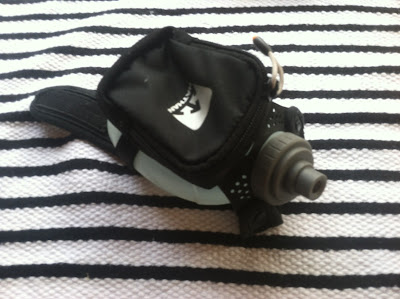 Thanks for reading and don't forget to sign up to follow this blog!
Posted by Unknown at 11:04 AM